Don't miss a single thing and join our Jonesin' for Newsletter!

Get the latest updates, special offers, and exclusive content just by signing up below!

Releasing Happiness from the Outcomes with Rhett King

Releasing Happiness from the Outcomes with Rhett King- Episode 76

Rhett King is a very successful person. He has gone from a D1 basketball player, to a successful social media business guy, to doing music, he is a guy that chases his passions and creates the life of his dreams! In this episode of the Jonesin’ for Show Rhett shares his journey on how he discovered that to be happy, he needed to release it from the outcome. 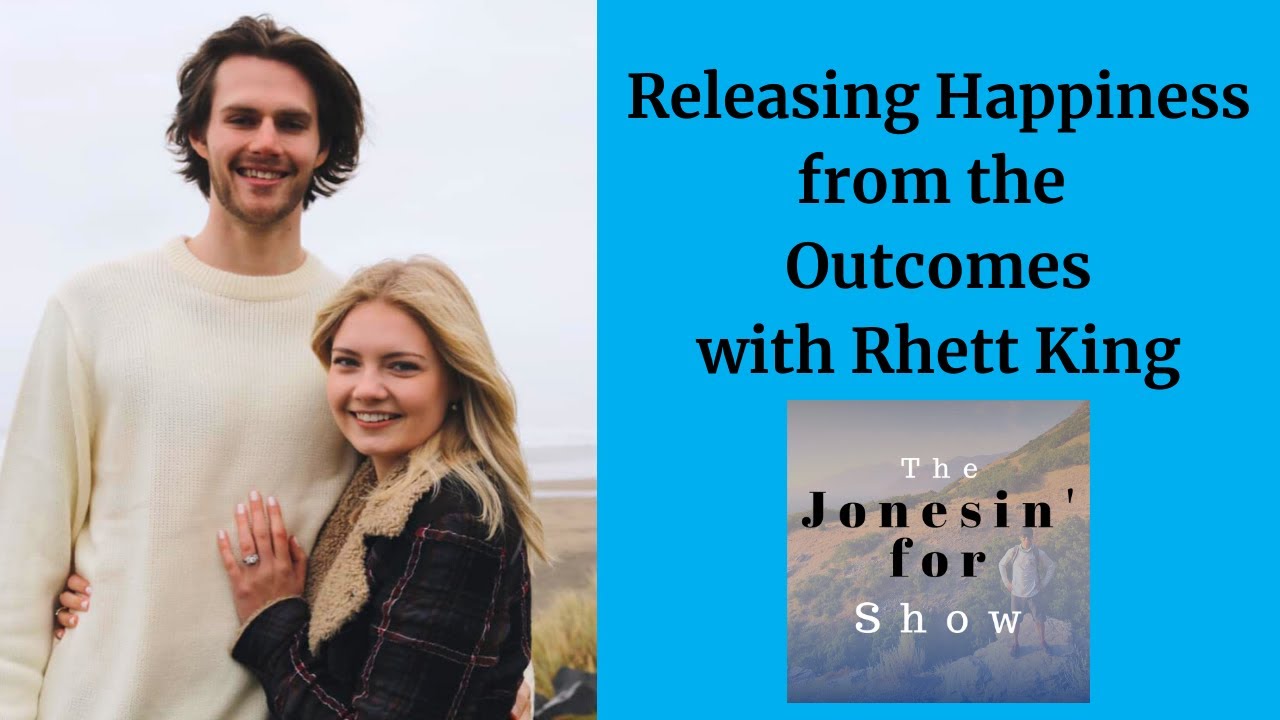 Rhett grew up mainly with his mom, he would see his dad a little bit, but his mom was always the one empowering him and telling him that he could do anything. Fast forward to high school, Rhett was 6’5 and he fell in love with basketball. He would train nonstop in hopes of being able to get a basketball scholarship to go to college to play. Unfortunately, he didn’t get any D1 schools interested in him, there were a few smaller schools, but none of his dream schools were interested. He applied to one school that was about 30 minutes away from where he lived and was able to play basketball with them over the summer. In a pickup game that summer he got a really bad sprain. Sadly he had to take a lot of time off to heal. It was a big shift going from training 4-6 hours a day, to not being able to do anything. Once he got to school, he was able to start practicing again, although he still wasn’t in shape and he ended up injuring the same ankle again.

His life was ruled by basketball. Everything revolved around it. When he realized that he wouldn’t be able to play for awhile and when he could, it wouldn’t be with a Division 1 school. It was a reality and ego check. He only wanted to play division 1 basketball for bragging rights, and that wasn’t such a great reason. Once he realized that, he stepped away from basketball and felt free to do anything. Rhett joined a fraternity which was something he had never been interested in before, but he ended up meeting some really great people. He even met a woman who would become his fiancé at one of their functions and had a really great time. If he hadn’t gotten injured that would never have happened. Everything ended up working out for the best!

On the last day of Rhett’s first semester, one of his friends in the fraternity told him about a party. A girl that he thought was pretty cute was going to be there, but she had a guy that she was talking to. He went to the party and it turned out that the house they were at wasn’t even owned by the person throwing the party. The person throwing the party was working on a project for the owners who were letting him stay there for a few days. The owners came and kicked everybody out. While that was happening, Rhett heard the girl that he was interested in end the relationship with the the guy that she was with and decided that was his shot. A bunch of people went back to the dorms, including Rhett and the girl he liked, and they wound up talking for a long time. He got the girl’s number and they started texting over break. Rhett started dating her a few days after that break where they started texting, and then he found out that she had chosen the school they were going to for their study abroad program.

During their sophomore year she was going abroad for the full year, but they really liked each other so they decided it would be worth it to try to stay together. He wasn’t entirely sure of what to do for that year. He wouldn’t have his girl friend with him to hang out with, he didn’t have basketball, and pretty much all of his fraternity friends were going to study abroad too. So, he decided to start going for his real estate license. He got the license on his 28th birthday and began sending emails to different realtors throughout the city. He did find someone who he really clicked with, and they began working together. Even though Rhett really enjoyed working with that guy, he realized that real estate wasn’t really what he wanted to do. Over his next break from school, he would sit around on his phone, but he was bored. He saw a bunch of people making money selling ads on Instagram and decided he wanted to try growing an Instagram account to hopefully monetize in the future. He managed to grow an account pretty quickly, and the guy who he was doing real estate with asked Rhett to run his social media. A handful of the other top real estate people in the area also hit him up to work on their social media accounts. At that point Rhett knew he was more focused on the money from it rather than helping people, which he admits is not the right way to go about it, but he wound up doing that and getting some clients. At the end of that year his girlfriend came back, and they moved in together. Rhett knew that if he continued working hard with his social media jobs he could continue to grow them, and that’s exactly what he did.

Rhett did grow away from focusing mainly on money, and now finds it very important to give back and spread positivity. That shift started when he stopped being primarily driven by success and outside forces. He realized that he wasn’t being fulfilled by money. When he would approach clients, it was no longer about wanting to get their money, he actually cared about helping them and wanted to be of service to them. There’s a lot more pressure when you just care about money and wanting to be the best. Once you step away from that there’s a lot less stress. It’s no longer about being the best and needing to get money, it’s about wanting to help and doing what you can for other people. This was also when he started getting more into music which he found much more fulfilling than just getting a lot of money. The journey of getting to be successful is much more gratifying than the money you get when you get there. There are tons of people out there that don’t have much money, but they are still super happy with their lives.

If you would like to be truly happy, know that happiness comes from inside you. It doesn’t come from outside events, people, places, or things. It needs to come from you. However, we are shown time and time again that if we want to be happy we need to buy or experience this, that, and the other thing. In reality, those things are crap. To be happy you need to love you for you and work to make the world a better place. Essentially, release your happiness from the outcomes and you won’t let those outside forces control you any longer!

If you would like to connect with Rhett the best place to find him is on Instagram @rhettking or on YouTube. I would love to hear what you think about Releasing Your Happiness from the Outcome and the interview with Rhett King! Please send me a message on social media @Jonesinfor or email me at [email protected]