What is a growth mindset? Will it and how can it benefit me? These questions are answered in this episode of the Jonesin’ for Show! In “Growth Mindset and More” I interviewed one of my former students, Alex Ullrich, about how his growth mindset helped him get through physical and mental struggles throughout his years in high school. 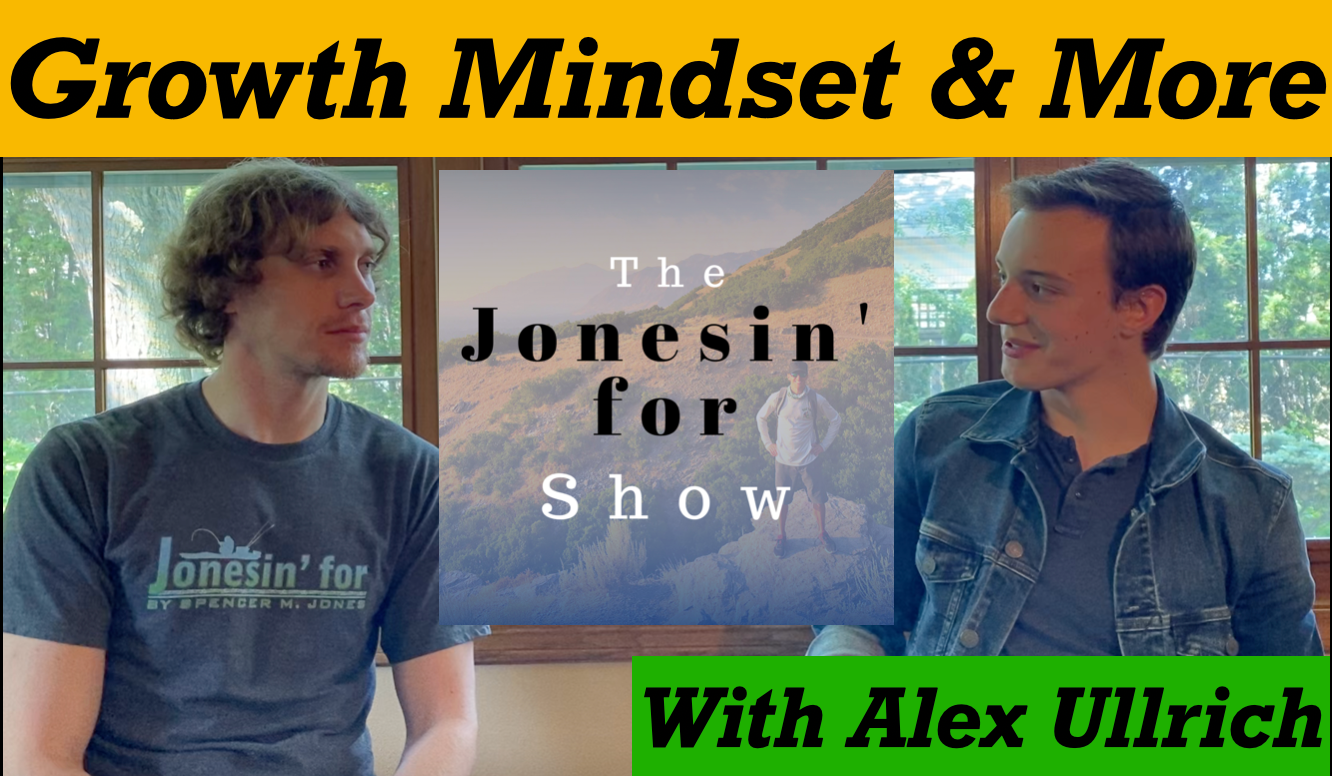 Let’s first learn a little more about Alex. He graduated high school this year and plans on going to the University of Texas at Austin. After one of his high school teachers mentioned that he thought he could see Alex going to school in Austin, he decided to tour it and fell in love with the college. Alex toured about five or six colleges, and applied to about five colleges, not necessarily all of the ones he toured. He isn’t sure yet what degree he wants to pursue, but he’s looking at computer science, neuroscience, and several other things. At the moment he’s looking mainly at computer science and neuroscience. I went to school to be a music composer, shifted to become a choral director, and now look where I am! Life can take you in entirely different directions than you expect. My personal advice for Alex is to enjoy his first year and take in all of the new experiences and keep an open mind and that is exactly the mindset that he said he is trying to take with his college experience as well.

When asked what Alex sees himself doing in five years, he says it would be really cool to work for a big company like Google and maybe do some work developing AI (Artificial Intelligence). One thing he heard somewhere that really got to him was that true AI will be the last thing we ever invent so we’d better do it well. We need to do it well because it could solve many of our problems, like possibly cure cancer, and invent other new things for us. However, it could also be the last thing we invent because as humans we could become unimportant and unneeded. Alex listens to many different podcasts, including things about financial independence. He has put a lot of different savings into different investments.

Some of Alex’s biggest successes in his high school career include being one of the three valedictorians and having some pretty big parts in the musical theater shows. Before CoronaVirus COVID-19 hit, he was supposed to be captain of the tennis team. The thing Alex is most proud of though is that even though he was busy with clubs and theater, and other things is that he was able to stay in shape and keep a growth mindset. It is very impressive that even at his young age he was able to realize how important having a growth mindset is. A big part of this came after his sophomore year when he listened to a personal development book and it really impacted him and his life. He realized that one of the most important things to being happy and successful is that you’re constantly working towards something. In life you’re always going somewhere, so why not try to pick where you’re going. One piece of advice Alex would give for working towards a goal in life is everything you do carries momentum. You don’t have to instantly jump to the end of the goal, everything you do will either carry you towards or away from your goal. If you have a growth mindset you will always grow and learn. While some situations and circumstances might not be pleasant you can always learn from them. Keep a growth mindset and always move towards a dream or goal.

Going back to when we met, we mainly worked together in the musicals where I was the music coordinator and helped the students sing their part. During his junior year he was struggling a bit. Classes were hard, the musical was very time consuming, he was in two varsity sports, and even had some mental health problems. He realized that he wasn’t doing as well as he usually did and started to focus more on his meditation. Eventually he realized some things that were wrong, like having sleep apnea among others, and began trying to fix them. Luckily, he was able to fix them and is feeling great again! Alex is thankful that he was able to get through these tough times and hopes that if others know about his struggles they can get through their difficult times. Alex definitely recommends that if you feel something is wrong with you, try to figure out what it is. See a doctor or a therapist, or whatever other help is necessary.

Alex stays quite productive and busy. He is able to keep up with everything going on every day because he has a set routine. He usually wakes up around 10 and jumps right into a cold shower before making breakfast. Then he goes for a walk to a park where he sits and meditates. He then goes back to his house and goes after whatever task he has to do for the day before spending a while to learn things. In the afternoon he does his workout, which he focuses mostly on strength, though he loves cardio as well. Afterwards he jumps into another cold shower, which is one of his favorite parts of the day. When he gets out he does some breath work and meditates a bit more and afterwards he’ll read a little bit or do some laundry or some other things. Then he eats dinner and afterwards he chills out. (Note that this is his Summer routine and his school year routine will look different)

Two of the things that I thought were interesting was the breathing work and the cold showers. Not many people take cold showers or do breathwork, especially people his age! So I asked him about it. Alex said there’s a practice, called Wim Hoff, that says that we aren’t meant to live in climate controlled comfortable spaces all the time, and if we aren’t triggered by cold temperatures sometimes, then it can have some detrimental effects. By taking cold showers and doing some breath work you loosen up some of your blood vessels which makes it easier to deliver blood to the rest of your body. In that regard it’s very similar to what cardio does. This Wim Hof method that Alex uses helps him to not stress out, he says that he hasn’t really ever been stressed since he began doing it. He would definitely suggest people look into the Wim Hof method and talk to their doctors as well about trying it.

Because I don’t have many young adults on the show I wanted to ask Alex for some advice to parents or anyone with a child who is currently in or finishing up High School. Alex suggested to not be forceful, and expose them to things like having a growth mindset/ Encourage without nagging them to do the same things but don’t force them because that could make them not want to do it even more.

If you would like to learn more about Alex or follow him on Instagram you can find him @aullrich5. I would love to hear what you think about Having a Growth Mindset and the interview with Alex! Please send me a message on social media at @Jonesinfor or email me at [email protected]