Pursuing Your Passions with Joe Hector

Pursuing Your Passions with Joe Hector

In today’s episode I chat with Extreme Kayak Fishing Tournament Director Joe Hector. We discussed how he pursued his passion of fishing and made it into an event that draws people from across the world. Not only his passion of fishing but drawing, painting, fitness, and more. How does he pursue them all? How can you pursue your passions? This episode will help you learn how to do just that! 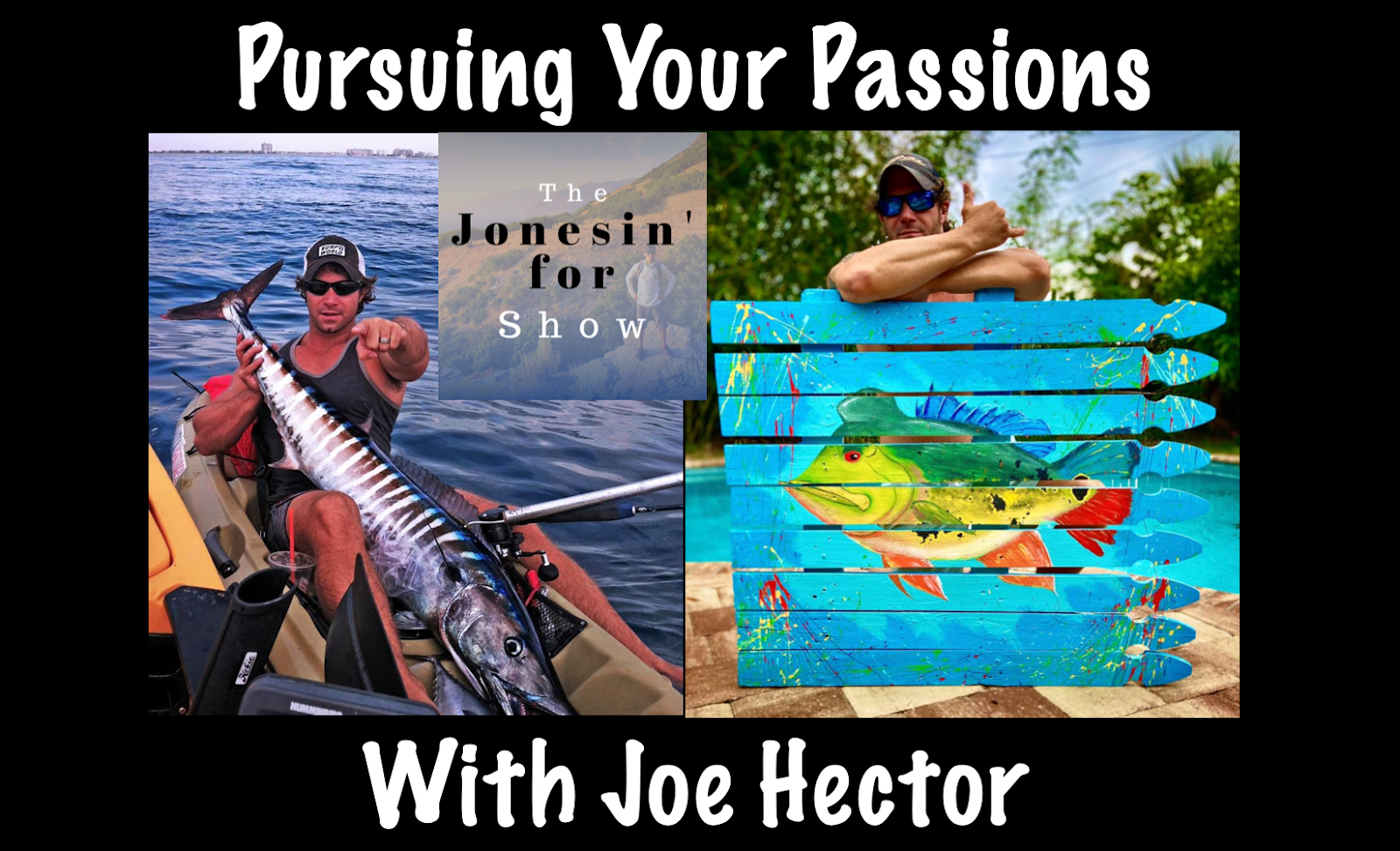 Let’s start at the beginning. Joe’s passion for fishing started as a kid in New Jersey. His family went fishing all the time, and would frequently compete in tournaments. He found it incredibly interesting to see how the tournaments were run, though of course he enjoyed catching fish in them too. He went to college in Florida, at the art institute, although his parents didn’t necessarily support it. Joe’s father wanted him to take over his business, but it wasn’t something that Joe wanted to do. Like many people, myself included, when he was in college he was unable to continue fishing because he didn’t have the money or time for it. Then Joe met a friend at the gym who asked him if they could go fishing together, and of course Joe agreed, so they began fishing off of a beach. A few weeks later he was eating dinner and saw a show on the history channel, which gave him the inspiration to get a kayak and begin fishing off of it. After kayak fishing he decided to take his skills in fishing, and graphic design, to start an event or something like that for offshore kayak fishing. One of his clients/friends offered to give him some money to help him get started. At first it was very difficult, and he didn’t make any money for the first few years, but he had an awesome team that stood beside him, which is something that he feels is very important. Many sponsors turned him down at first, thinking that he was absolutely crazy, but eventually he gained his first two sponsors and they really helped him to get through and make a name for his brand. Ten years later, he still has those first two sponsors backing him up.

A lot of people ask Joe how many people fish his Extreme Kayak Fishing Tournament, but for him it’s not about that. He loves building up the event, so that it’s not just a fishing tournament, there’s a paddleboard race, there’s a fitness competition. There’s so much more than just how many people are fishing, it’s about having fun and bringing your family. It’s about the random people walking on the beach just passing by the event and thinking that it’s cool. I personally have fished in multiple tournaments, and what I’ve noticed about Joe’s tournament is how many people there are at the tournament and just watching. Much more than other kayak fishing tournaments. Plus, like other tournaments, I love that everybody can get to know each other and there’s so much to do. The community surrounding all of these tournaments is amazing! Joe realizes that he can never know what’s to come the next year, so he puts his all into putting on the best event that he can for the current year. His whole team puts in so much effort and it’s like a big family.

Joe believes that no matter what you’re going through, you can always find a positive. For example, there was a guy that Joe fished with for years who never caught a fish, and the guy said that he always went out knowing that he wasn’t going to catch anything. This is the wrong way to go about things. You need to believe you can do something, in order for it to work out. If you aren’t confident in what you do, don’t do it, because it’s probably not going to work out. That is a mindset that Joe lives with firmly in his mind, and I agree with it as well. Many people believe that they need money to be happy and have success, but I believe that isn’t true. You can be completely successful even if you aren’t making millions of dollars.

Joe is able to do everything that he loves to do, because he sets aside the time for himself. He tends to go with the flow, if there is something that he doesn’t want to do and doesn’t have to do then he isn’t going to do it. There is a lot of stress that comes with his job, and he finds his zen in painting, so he always makes sure to set aside the time in order to continue that passion of his. Sometimes he even sells some of his art as well for his customers and fans who are interested in commissions. Another thing that Joe puts a lot of time into is working out. He believes that if people see that you put a lot of effort into making your body feel and look good, then they’ll believe that you’ll put a lot of effort into the things that they want you to get done. Joe’s biggest struggle in chasing his passions has been his own head. Sometimes he tends to overthink things and let the hurtful things that other people say get to him. He finds it really tough to put a smile on his face after seeing the nasty emails that he sometimes gets. The biggest joy that he has gotten is the people that he’s met along the way. Joe has met people from all around the world and he thinks that it’s awesome! In the end when all of this is over he’ll be able to say that it has been an awesome ride. He will never forget the amazing stories, events, and people he has met along the way.

You can find Joe at extremekayakfishing.com, on his Instagram at extremekayakfishing, on facebook as Joe Hector, on Youtube as Extreme Kayak Fishing TV, or at his podcast RawH2O. I would love to hear what you think about Pursuing Your Passions and the interview with Joe! Please send me a message on social media at @Jonesinfor or email me at [email protected] Thanks!