Taking A Leap of Faith with Mike Dedoes

Taking A Leap of Faith

On this episode of the Jonesin’ for Show I talk to Mike Dedoes, an up and coming personal trainer who has recently taken a large leap of faith. Mike shares personal stories and multiple ways to help you take leaps of faith and live your life to the max! 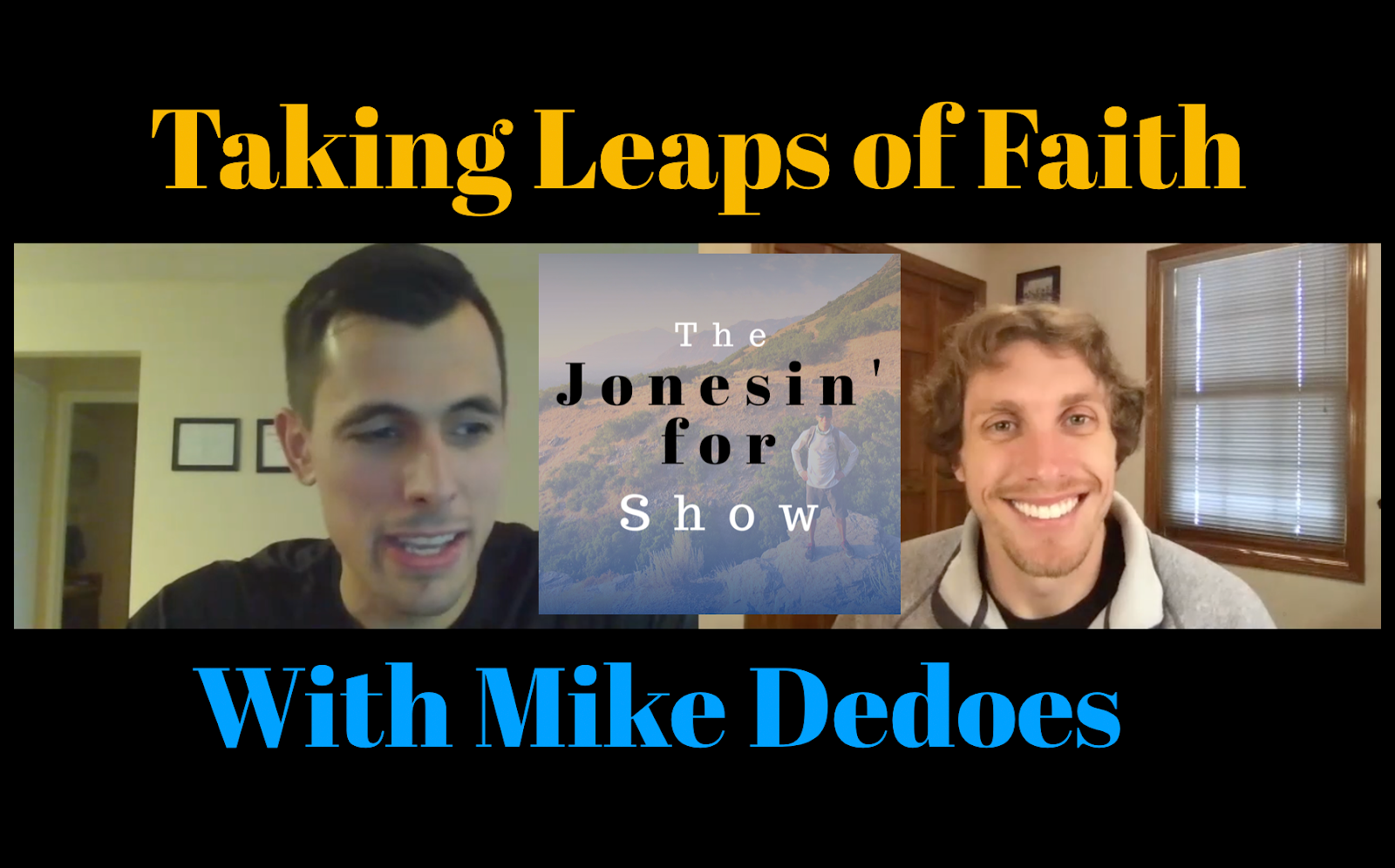 Through high school, Mike was not confident. He was bullied, and had a learning disability, and preferred not to speak in front of people. Mike was very self-conscious, and was always trying to prove himself. For example, he would frequently go to the gym with a friend, and he would always feel like he needed to lift the heaviest weights and look to see if there were any pretty women watching him. Mike believes that we tend not to take steps in order to reach the next level of where we want to go. In order to get past the setbacks to take a leap of faith you first need to change your mindset. For example, Mike had a hard time getting a job because he believed he was bad at interviews, in order to get a job, he needed to stop focusing on the poor interviews he had and focus on the fact that he could do better on the next interview.

The most recent leap of faith Mike went through was his move from Michigan to Tennessee. Mike had lived in Michigan for a while, working an IT job. He knew he had to make a change, he had been getting bored of his job, hated the weather, and other things about Michigan. He talked to a trainer about it and the trainer told him to do it. At first Mike didn’t know if he should do it, but his trainer told him that in order to take a leap of faith you need to commit first, and figure it out afterwards. Mike put in his two weeks’ notice and someone helped to find him a job in Tennessee. The job he has is temporary, but it has been working out so far. He is using his time to continue chasing his goals of becoming a personal trainer.

Mike believes that the worst feeling to have is regret, knowing that you had the chance to do something you wanted to do, but didn’t take it. You need to have a sense of urgency to change your life for the better. If you want to make a change do it now, because you never know if you’ll have tomorrow. You don’t need to have everything figured out before you commit to something, commit and figure everything out afterwards otherwise it’ll never get done. If you only do quick fixes for things you want to change, you aren’t changing anything in your life. For example, if you want to lose weight and you do a week of an exercise program and when you lose the weight you want, you quit the program, that doesn’t fix any problems. In order to make the change you want in your life you need to shift your mindset to make the change permanent. When you focus on the mindset of change, try doing one thing differently than you used to do. Moving a little bit every day is easier and more helpful than making an extreme change right away.

If someone is feeling as though they need some kind of change, Mike has a lot of advice he would give them. Firstly, he suggests finding the root of where the uncertainty is coming from. For example, Mike’s uncertainty that was holding him back was his childhood bullying. Another way to try to find out what change you need to change is try something different, or something that you aren’t used to doing. For example, if you normally watch Netflix when you get home from work, try going for a walk instead. Try meditating, or journaling, or just focusing on yourself, answers might come to you that way. Once you figure out what the change you need to make is, commit to making the change and go for it! Whatever you do, you need to believe in it, you need to put passion and emotion in it, or the change won’t happen permanently. The more you change your mindset internally, the more will change about you externally. You get back what you put out to the world. If you put out positivity into the world, you’ll get positivity back.